This month at Cook the Books we are reading Elizabeth Bard's book Lunch in Paris. 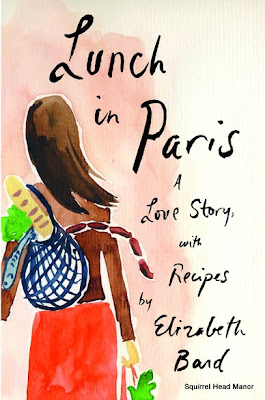 This could be made into a romantic comedy-drama movie easily ……….with a Parisian setting and scenes in the restaurants, cheese shops, the wedding…….oh yeah. People would go see that. I am enjoyed this book and the way the author speaks to you as she would if you were sharing lunch conversation. Laid back, to-the-point, witty and engaging.

One of the events where she felt her life changing:

“The thought occurred to me more than once. What in the name of Karl Lagerfeld am I doing here?

I was wearing the same clothes, holding the same drink, as a night out in New York , but everything felt wrong. I didn’t belong to this amped -up jet set………only three months out of Manhattan, and my sense of destiny, of arrogant momentum, was beginning to dessert me. I was trailing my old life into my new life like toilet paper stuck to the bottom of my black lizard heels. I was trying too hard. It was conspicuous and embarrassing, and I wasn’t having any fun.”

I liked the way she described their parents meeting for the first time:

“Gwendal and I are both only children, so it was clear that each side was offering up their most prized possession, hoping others knew what a precious gift they were receiving. When introducing future in-laws, a language barrier can be a very useful thing indeed”

The two couples sitting across from each other tonight were so different that there was no possible way they could pass judgement. My mother was a bobby-socked sorority girl who saw Elvis in concert at the Brooklyn Paramount . Paul grew up speaking Yiddish in the Bronx . Nicole was born in Casablanca when Morocco was still a French protectorate, and Yanig was raised in a small fishing village in Brittany, where he would sail his grandfather’s boat.”

Yet it worked….they had nothing in common except their children.

I delighted in the courtship, the wedding and the cultural differences they were getting accustomed to with one another….but Chapter 14 wiped the smile off my face. The way Yanig’s condition was described and the fact that Elizabeth spent time in her in-laws kitchen, thinking of Yanig and her own father, was a topic I was quite empathetic over. Why didn’t Yanig’s family get a second opinion, ask questions, research options?

“It dawned on me for the first time. In coming to Paris I signed up for more than flaky croissants and shiny mackerel. I had accepted a way of dealing with life and death. ….I was trapped in someone else’s system, like I’d bought a one-way ticket to a place I didn’t understand”

This is a memoir I would recommend for anyone who enjoys reading about France, cross cultural exchanges as well as some fine recipes. We have already made several and plan to try more soon.

In keeping with the spirit of making it as Gwendal might, by purging the refrigerator and adding pancetta, I present:

While the pancetta is browning up in the frying pan I am chopping veggies. 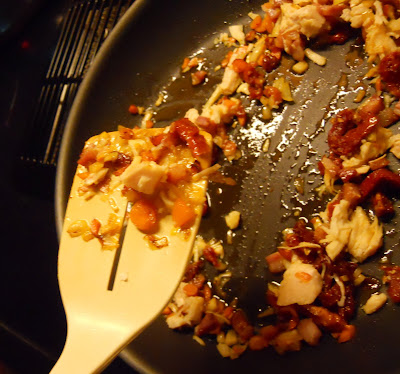 Pasta water is on the boil, the veggies are tossed into the frying pan.
Now I added a bit of sour cream to this vegetable and pancetta mixture....just to get it creamy. 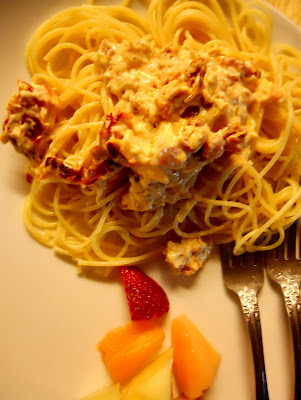 I also prepared Ratatouille, recipe is on page 173 in the book. 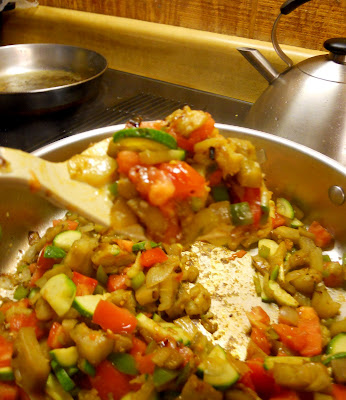 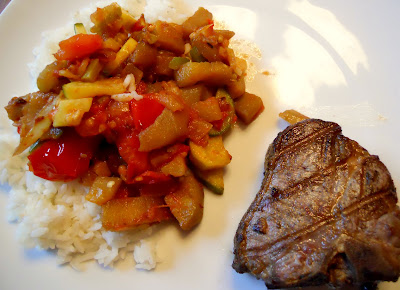 Surf over to Cook the Books and join in!

Also, I am sending this to Kirsten at From Kirsten's Kitchen to Yours - this weeks host at Presto Pasta Nights. 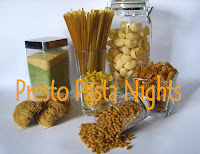 I am cross posting to Novel Meals since it's a book review :-) 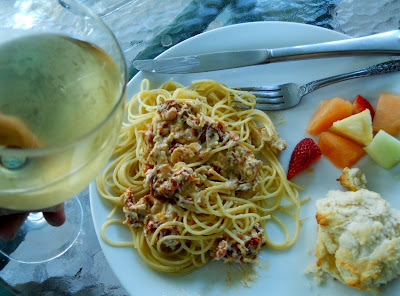