Cook the Books: Charlie and The Chocolate Factory

The featured book over at Cook the Books is Charlie and The Chocolate Factory by Roald Dahl. It had been awhile since I read and listened to this classic. 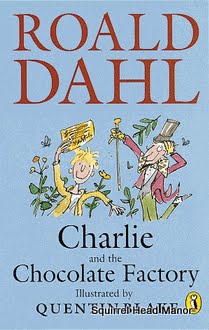 Mr. Willy Wonka, the eccentric owner of the greatest chocolate factory in the world, has decided to open the doors of his factory to five lucky children and their parents. In order to choose who will enter the factory, Mr. Wonka has five golden tickets hidden inside the wrappers of five of his famous chocolate bars.

The newspapers descend on each of the winners of the golden tickets. Augustus Gloop, a fat child whose only hobby is eating, gets the first ticket.

The second ticket is “won” by Veruca Salt. Veruca is a spoiled obnoxious child and is only in possession of one of the winning tickets because her rich father employed his factory of peanut shellers to unwrap chocolate bars until they found a ticket. That’s not very fair, is it?

Third ticket is discovered by Violet Beauregarde as she takes a break from gum chewing. She is trying to set a world record for gum chewing – lofty goal indeed.

Ticket #4 belongs to Mike Teavee, a boy who is obsessed with television. Get the play on words with his last name? Teavee = TV

The last ticket is found just the day before the tour of the chocolate factory is scheduled and it’s found by our unlikely hero - Charlie Bucket. Charlie is very poor and he lives in a drafty shack with his parents and both sets of grandparents. . There are just two rooms and the grandparents share the only bed while Charlie and his parents sleep on mattresses on the floor. They barely have enough food to fed the lot of them and then, Charlie’s father loses his job. It looks as if they will starve to death.

Fortuitously, Charlie finds a dollar one day, just sitting near the roadside in the snow. To celebrate his good fortune he purchases two chocolate bars. The same sort he gets once a year on his birthday. In the second chocolate bar he finds the last golden ticket. The very next day the five children, accompanied by their parents and Charlie accompanied by his grandfather, line up at the gates of the factory. There is much fanfare over these children getting a tour of the factory as no one has been inside for many many years.

As all the children except Charlie are insufferable brats and never listen to anyone’s instructions – thus..they suffer appropriate consequences to their poor behavior. I enjoyed that very much. The Oompa-Loompas would sing songs about each spoiled child as each suffered their punishments, noting in song all the shortcomings of their behavior. How awesome is that!

Near the end of the book all four of the bad children are sent home and Charlie “wins” the tour. A great prize it is too as what he’s won is ownership of Willie Wonka’s factory.

(This is the before shot of the roast prior to cooking) 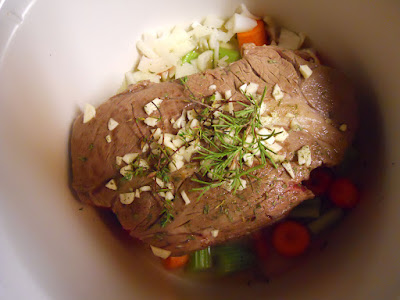 So.......you'd think the inspired meal or dish would be totally chocolate related, right? I decided on a beef roast with vegetables and potatoes rice as the beginning of the book painted such a bleak portrait of the Bucket household's pantry. They spoke of watery cabbage soup.......but I am not inclined to have severe lower abdominal pain for days on end slurping cabbage soup. Nope.

Here is the sustenance the Bucket family was missing in the beginning of the book. 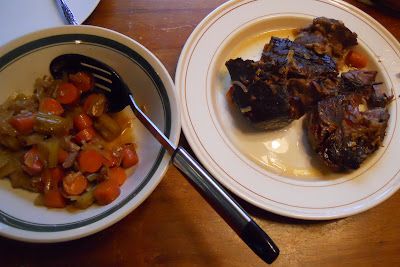 Brown and drain (if using chuck or another highly marbled cut) in frying pan with a little bit of oil. Combine 1/4 cup flour, the salt and pepper. Coat meat with the flour mixture. Place all vegetables in Crock-Pot and top with roast (cut roast in half, if necessary, to fit easily).

Cover and cook on Low for 10 to 12 hours. If desired, turn to High during last hour to soften vegetables and make a gravy. To thicken gravy, make a smooth paste of the 3 tablespoons flour and the water and stir into Crock-Pot. Season to taste before serving.

You can serve with mashed potatoes and place that lovely gravy atop or (if you are married to a southerner as I am....even though he doesn't act or sound like one) you may serve over rice. 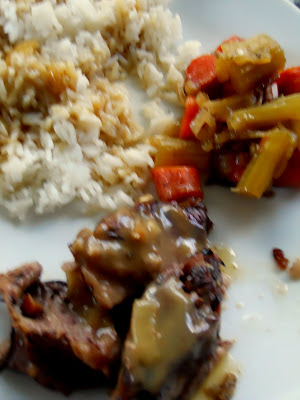 Surf over to Cook the Books to see what delicious dishes other readers are serving.

Only 22 days and Christmas is upon us. Whaaaat ?  As the end of 2021 creeps toward us I started thinking about the various reading challeng... 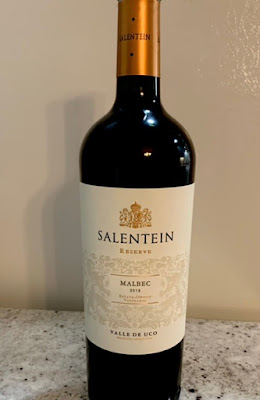