Fish Chowder to warm your bones

Quite a while back we decided to make a fish stew, the Mediterranean style with tomatoes. It was good but I have been craving a milk based version so.....here it is. Once again we saved leftover grilled fish. This is great for saving money as well as having a variety of white firm fish in the chowder.

Evidently if you make a milk or cream based soup it's called chowder. I learned this surfing the web for different takes on the "recipe."

Easy as can be and it made a great dinner. I had made a baguette earlier in the day just to go with this chowder, splendid combination and definitely comfort food. Next time we may make it a seafood chowder and toss in some bay scallops.


Fish Chowder
2 cups onions
1 tablespoon olive oil or butter
1/2 cup white wine (optional - we used Chardonnay)
3 peeled and chunked Yukon potatoes
a bay leaf, salt and pepper
1 teaspoon Old Bay seasoning
1 1/2 cups cream (or Half-n-Half)
1 1/2 pounds white firm fish
Method
Saute onions in olive oil or butter. When they are soft add wine and turn up the heat until it reduces. Add potatoes and seasonings. The potatoes should be barely covered as they simmer for 10 - 15 minutes. Since I didn't have enough wine left to cover them I used vegetable broth. You could use chicken broth if you'd rather.
Heat the cream in a separate pot, be careful not to boil. By the way, Half-n-Half will boil quicker than real cream - consider that a warning! Just get it to steamy, not simmer and definitely not boiling. Now add the cream and the fish to the potato mix and cook another 10 minutes.
That's it. Add salt and pepper to your taste once it's served. This is a good chowder, we will be making it again.
I am sharing this with Beth Fish's Weekend Cooking Series and Deb at Kahakai Kitchen for her Souper Sunday series. Click HERE to see this week's linkup. 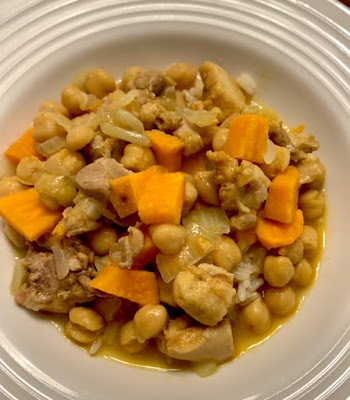